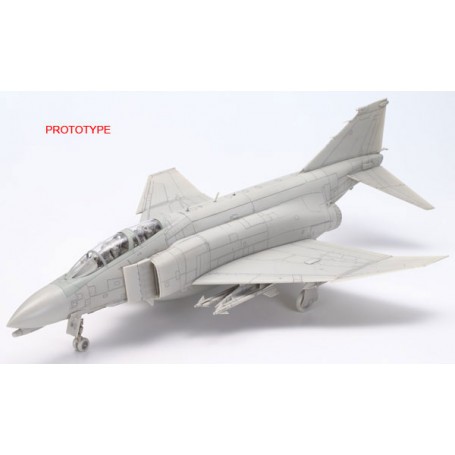 Airplane model kit (to be assembled and painted)
Paint and glue to be bought separately (See paints and tools)
Scale : 1:48

A legendary aircraft will soon make its entry into the 1/48 Tamiya Aircraft Series: the McDonnell F-4 Phantom II and more precisely the version embarked on the F-4B aircraft carrier, the first used by the US Navy, which distinguished itself during the Vietnam War.

● Model to assemble scale 1/48. Length: 370mm, height: 104mm, wingspan: 244mm.
● Shapes and dimensions precisely reproduced thanks to research carried out on the real aircraft.
● Clever decomposition of the parts allowing a simple and robust assembly whatever either configuration chosen.
● Meticulously detailed two-seater cockpit with pilot miniatures.
● Outer wing sections deployed or folded as desired. ● Mobile stabilizers.
● External loads: additional tanks, Sidewinder and Sparrow missiles.
● Various marking possibilities including the VF-51 during the Vietnam War.
● Color decoration guide < br />
Views of the model under development. This is not the final model.

Type of product : Airplane model kit
To build a plastic model airplane, you'll need a few things :
- a cutter or cutting pliers
- and model glue.
You can also paint the model with brushes(acrylic or enamel).
The model consists of different parts to cut and assemble.
Construction time will vary depending on the number of parts.
An instruction manual is provided for you inside the box.

Paint and glue : To be bought separately
The tools, paints and glue are not provided. You can see our selection with the essential glues and paints or the full range..

Tamiya: Specialties and ModelsTamiya is a Japanese brand founded in 1946. She is involved in the design and marketing of radio-controlled electric vehicles.All you have to know about TamiyaWho is the Tamiya manufacturer?The Tamiya Incorporated brand was founded in 1946. It inherits the name of its founder: Yoshio Tamiya and is based in Shizuoka. The Japanese company specializes...